The NBA Stands Up 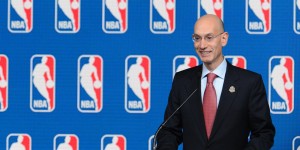 Last night was a landmark moment in American sports and society, as the NBA pulled the 2017 All Star Game from Charlotte, NC and began looking for a new host city. This seems decently trivial on the surface, but the reasoning for such a switch is glorious. Throughout 2016 there have been protests to the widely anti-LGBTQ bill in North Carolina, House Bill 2, that restricts bathroom access for transgender people and omits anti-discrimination protection for members of the LGBTQ community, not allowing their cases to be held in any state court in North Carolina.

This restrictive bill has rightly been criticized, and the NBA has casually threatened to move the All Star Game from Charlotte for a few months in an effort to get the state legislature to change the bill. The state has since stood firm on their decision and NBA Commissioner Adam Silver announced next year’s All Star Game was looking for a new home.

The NBA is in an interesting spot currently. While the NFL is still the most popular and powerful sports league on earth, the NBA is quickly catching up. Thanks to an adoption of social media as part of the game, growing popularity across the globe, the rise in physical concern for football players, and the tenure of potentially the most socially progressive Commissioner in sports history.

Silver became immediately notable for removing Los Angeles Clippers owner Donald Sterling in face of evidence of gross racism. With the move to take the All Star Game – and the millions of dollars for the North Carolinian economy that comes with hosting one of the biggest events of the season – out of Charlotte, he continues to be a stand up figure in fighting for a better country. He has an immense self awareness of the magnitude of his position, and the growing cultural power behind him, and has become a White Knight.

If you weren’t already a fan of Silver – which empirically seems very unlikely – then this should hopefully get you behind him and the league anew. The reality of America in 2016 is that the largest corporations among us have the most power to sway decisions. It’s sad, but citizens don’t have hundreds of millions of dollars to credibly throw around to incentivize societal progress. The NBA has twice now stood up to use it’s power for good. This league is only going to continue to grow in popularity by standing up for the rights of some of the best parts of our society.

It is zero question that members of the LGBTQ community deserve equal rights and freedoms as everyone else in the United States. I am proud to be living a life where more landmark decisions in support for the community have come than at any other point in history. The optimist in me hopes this continues to be the trend, the ally in me hopes to help this come to fruition, and the sports fan in me is proud that a league I care to give a lot of attention and time is using their resources to help rather than stand pat out of fear.

If you didn’t love the NBA before, today might be the time to start.

← Timmy Turner: Maybe Desiigner Is Amazing After All
Fenway Friends →