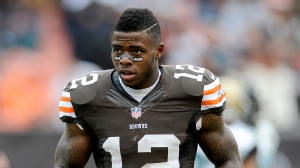 The NFL announced today that Cleveland Browns wide receiver Josh Gordon has been reinstated into the league after sitting out all but a few possessions of the last two seasons. The 25 year old has understandably disappeared from our collective football consciousness in this time span, which is weird because of his 2013 season. Two full years gone is no joke, but neither was the 1,646 yards he had while leading the NFL that season.

I’m selfishly excited to have a chance to draft Gordon in fantasy football this year. That magical 2013 season? I traded him away just after his first great game for pieces, only to finish 3-10. I could use another chance to enjoy a huge season from Gordon – although his reinstatement comes with a four game suspension at the beginning of the year.

The interesting part of all of this is obviously the reason why Gordon missed two seasons. He didn’t get hurt, nor did he harm anyone. Gordon has had long-standing issues, extending to his days at Baylor, with bad decisions. He missed the first two games of 2013 because of a substance abuse suspension. Then he was suspended 10 games in 2014 for marijuana and an additional game due to violating team rules. He missed all of last year because he failed a drug test for alcohol during his time in the league’s substance abuse policy.

For Gordon, he has hopefully begun to get his life together. It’s incredibly easy to see young people make poor decisions and need to get their lives in order – I know from personal experience as a 21-year-old watching friends make mistakes with alcohol, although none being in the NFL. Gordon had obvious maturity issues, but the nature of his transgressions makes me eager to give him a second chance. Especially in the wake of last year’s suspension – he had a beer or two, if Gordon is correct in his account, on a plane and lost a season for it.

Just recently we have seen Le’Veon Bell get a four game suspension for missing a drug test (a situation that could command it’s own article), and Tom Brady get four games in retaliation for a wrist slap for Spygate. There are bigger issues for bigger suspensions – domestic violence at the top. Gordon is a young man who has apparently been making an earnest attempt at getting his life together. Why not allow him to prove he can handle the stress of public life? Especially with the knowledge that he is without a safety net going forward.

Here’s hoping that Gordon is making strides to get better. If he could become a role model for changing his behavior, maybe his teammate Johnny Manziel could follow suit. But for now, welcome back, Josh.