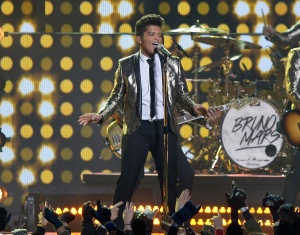 I think it’s fair to say we have had an interesting run of Super Bowl halftime performers in the last eleven years. Unrelated to this article I recently looked and realized I have vivid memories of sitting and watching each of the last eleven Super Bowl games (Super Bowl 39-49) including the halftime show. In that run we have seen the following performers:

That’s a fairly intriguing line of performers. The first six represented a who’s who of the Rock and Roll Hall of Fame that would appeal to a mass audience (Sorry Metallica) while the last five have drawn upon big names in the pop world. More apparent, there weren’t any repeats among that list. But now that may change.

Interestingly enough Bruno Mars has reportedly been approached to see if he’d be interested in playing in the upcoming Super Bowl 50.

Here’s the thing, I cannot even begin to lie and claim that Bruno didn’t do well his first time out. In fact, aside from Missy Elliott’s career revitalization this past February I have a hard time putting Mars anywhere than around the top of all those performances on a standalone basis. I’m not a particularly big Bruno Mars fan – I maybe enjoy/don’t turn off five to six of his tracks – but he was electric. It’s the kind of performer he is.

But to have him do it twice? In a span of three years? For Super Bowl 50? Now you have me confused.

How did Taylor Swift not begin and end this list? I’m a larger fan of her’s than I’d like to admit but even to all those that would be upset about her selection you’d have to give credit where it’s due. Taylor Swift is probably the biggest pop star that isn’t married to Jay Z working today – and even that’s a legitimate conversation.

Hell, where’s Ed Sheeran in this conversation? He probably plays the wrong type of music to get the Super Bowl halftime show but the guy is huge.

Maroon 5 hasn’t done it yet how exactly?

For the record: Nelly was a part of the halftime show that ended in Nipplegate but Jay Z, Kanye West, Drake, and Kendrick Lamar aren’t getting a chance?

Justin Timberlake is probably not allowed back after Nipplegate but he’d kill it if they welcomed him back.

Foo Fighters are the best option for a rock band that would tear the house down – frankly, The Black Keys might be the only thing keeping them from being the only choice.

But Bruno Mars twice? He was good, but to be out all of the people I just mentioned? We might need to think this one out a little more.

← Stephen Colbert is Back
Pokemon Go →