I’m not sure I fully have words for what went down at Gov Ball yesterday – which is unfortunate because I’m supposed to be writing about it – but I’m going to try and pick the pieces of my brain  off the floor and write about the day. 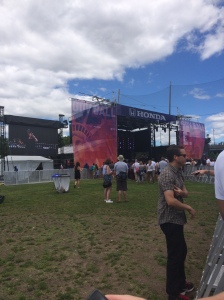 Through this entire weekend I have a partner-in-concert. Matt Gronsky volunteered himself as tribute to be dragged to a bunch of shows. We didn’t realize that it would be as hard to navigate the island with my wheelchair as it is. This was an oversight on my part – it’s a grass island, what did I think would happen? Regardless, I’m thankful to have Gronsky as my PIC for the weekend, because there is no way in hell that I would have gotten around solo.

This was especially true for our first show of the day: Run The Jewels. Matt and I arrived to Randall’s Island with the show just beginning. I’m a huge Run The Jewels fan with their debut 2013 album being on of my favorites of the past decade. I was dying to see them. So right as Matt and I walked in through the front gates I caught the opening verse to “Banana Clipper.”

I then made Matt dead sprint over to the Honda Stage to catch the show.

A few minutes after arriving and being completely awe struck at the southern brilliance that is Killer Mike and EL-P, I was able to meet up with a few of my friends: Brian Meyers, Alessandra Cirillo, and Sierra Lanfranco. This was a fun meeting of the worlds where best friends from Abington Heights High School meet best friends from Boston University. What did we do to celebrate this meeting of the minds? Jumped up and down to Killer Mike murdering “Job Well Done.”

With a gigantic grin on my face after witnessing the excellence of Run The Jewels Matt and I started to venture around the concert grounds. It’s a whole lot bigger at Governor’s Ball than I anticipated. I think the connotation of “island” in my brain didn’t connect to it actually being fairly massive. Gronsky and I spent a lot of time exploring the concert venues to become familiar with where we would want to be for each performance. We are calculating people 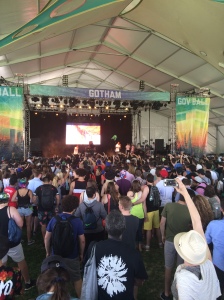 We ducked our heads into the Gotham Tent for a few minutes to catch the tail end of the show by Ratking.

Yes that is a band.

I had never heard of them before but they won Matt and I over. Not just with the energetic end of their set, but with a saxophone solo to close their time on stage. I’m not sure why we felt this was so awesome, but it was.

Matt and I went to go scope out the main stage at the festival to try and scope out where we should be that evening for OutKast. The stage and the seating area around it are extremely huge. This makes sense given how many people will want to watch the weekend’s headliners – Outkast, The Strokes, Jack White, and Vampire Weekend – from this stage.

While Matt and I grabbed a drink a few feet away we noticed that time had gotten away from us and it was time for Janelle Monae to take the main stage.

I admittedly haven’t heard any of her solo songs outside of the incredible “Tightrope” featuring Big Boi. That song is incredible so I was willing to stick around to see her perform. As Zach Dionne of Grantland mentioned on Twitter the other night “Absolutely perfect performer. Been to many hundreds of shows, seen a *few* that good, but none better.”

He’s really onto something there. I wish I had known more about Monae going in, because she was electric. Her voice was crazy strong, which was triply impressive given that it was an open air venue.

After she played a number of bumping, jazzy beats while owning the microphone she closed out her set with “Tightrope.”

We were killing some time and walked over to Bastille. We heard “Things We Lost In The Fire,” but not “Pompeii.”

Then came the happiest surprise of the day. While Matt and I were taking a rest (Read: Matt took a nap) while Julian Casablancas of The Strokes took the stage with The Voidz. This was the first of two shows he’s playing this weekend with The Strokes coming on tonight.

I had never heard any of the songs from The Voidz, but I’ve heard a few by Casablancas solo. My favorite of which was “Instant Crush” off of Daft Punk’s Random Access Memories.

So Casablancas and The Voidz opened up with an incredible alt-rock song that I wish I knew the name of.

I recognize the guitar. I hear a vocoder.

Casablancas starts playing “Instant Crush” and my day is made.

I became an exponentially bigger fan of Casablancas and The Voidz right then. They killed during their set as well. Sounded like a heavier version of The Strokes. Me like. 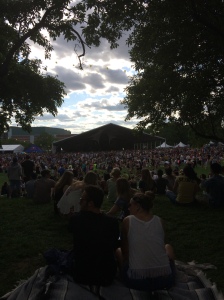 Matt and I watched La Roux from a far. We had other things to do.

This is when the day went from amazing to immortal.

Back in January I wrote about the night I met Big Boi from OutKast. That night I was taken care of by the living legend himself, The Great Cheez.

Last night I was blessed to be in the presence of an angel. The Great Cheez delivered and then some.

Matt and I made our way to the will call to meet up with our man Cheez. He took us through the concert grounds to the front of the stage for Outkast later that night.

He disappeared for a few minutes before returning and waving Matt and I along with him. Backstage.

We walked backstage behind Cheez tha god. He told us that, in order to make sure I was safe during the show he was going to seat us on stage,

Now, I’ve been more excited about seeing OutKast than any other show in my life. I was excited about it every single day since I heard Andre and Antwan were getting back together. I would have been happy watching from the back of the lawn. No, I’d be on stage.

I fought back the urge to cry happy tears as Cheez showed us the backstage area that was being prepared for the arrival of the two dope boys in a Cadillac.

While we were waiting backstage and taking a break from the craziness of the day at the concert we saw a familiar face. Killer Mike walking by us to the catering tent.

I called over to the virtuoso to say hi. He came over and met Matt and I while complimenting my USA soccer jersey I had on. I had thanked him and mentioned that I had my Braves hat with me to match the one he had on.

“Then we gotta get a picture.” Who says no to Killer Mike? Not I.

He could not have been a nicer guy. I already loved Killer and Run The Jewels but this pushed it to a new level.

We waited around for a while people watching and talking about OutKast before we saw two SUVs drive up beside us.

The ATLiens had landed.

Shortly after we were escorted to our seats by the Arch Duke of Parmesan. 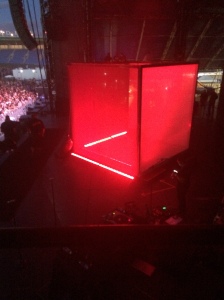 I started giggling for around three straight hours. This wasn’t real.

I looked to the side to see the mass of 20,000 people all gathered to see OutKast return to glory. 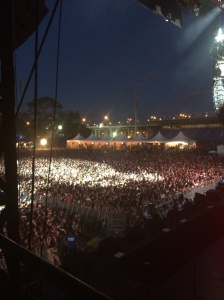 This was the most amazing sight I have seen with my own two eyes. There’s a beauty to seeing people coming together for one cause. The beauty is multiplied by the cause of uniting being OutKast. To see this many people, calmly losing their minds about the quickly approaching concert was incredible.

Then they came. A deafening roar came from the crowd. 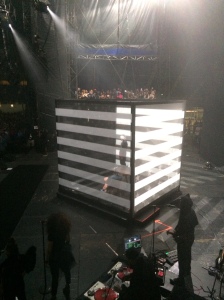 OutKast ran through twenty straight minutes of incredible music. “B.O.B.” into “Gasoline Dreams” into “ATLiens” into “Skew it on the Bar-B” into “Rosa Parks.” I was speechless. Literally, I rapped along to all of those songs and lost my voice.

Didn’t kill my drive to keep rapping along. The show was incredible over all. All the concerns I had at Coachella had not only been erased but forgotten. Andre was back in legendary form. Big Boi was a king. And I was right there.

As the final notes of “The Whole World” faded out on the night I looked to Matt. We knew without saying a word that this was the best night of our lives. All thanks to The Great Cheez, Sir Luscious Left Foot, and Benjamin Three Stacks.

It is probably going to be impossible to top that night. It was too perfect.

The best part? The festival is far from over.

See you this afternoon Chance. And later tonight Gambino.