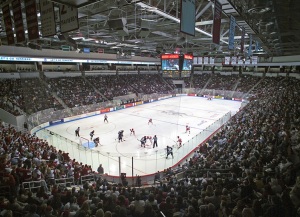 I did not grow up a hockey fan. This would be because my high school, nor any of the surrounding schools, fielded a team. The closest hockey was to me was the Scranton/Wilkes Barre Penguins, who play almost an hour from me. At that point it would make more sense to drive the two hours to see the New York Rangers at Madison Square Garden or the Philadelphia Flyers at the former Wachovia Center. My parents were not hockey fans. They were not interested in this travel. Therefore, for the first 18 years of my life, I never followed hockey.

Then I moved to Boston University. I hadn’t chosen a school with a proud football tradition like my friends at Penn State or Pittsburgh, I chose one of the most legendary hockey powerhouses in NCAA history. Jack Parker, the coach of the Terriers for 40 years, had won five national titles at BU, with the most recent coming in 2009. To call the Terriers relevant on a national level would be an understatement. But my arrival on campus coincided with the largest change to the BU hockey landscape in four decades. Jack Parker retired. In came David Quinn, a former Terrier player and NHL coach, to spell his former coach for the foreseeable future. Expectations for the team were oddly spilt. Obviously given the national title in recent memory it appeared that the Terriers should again be competitive on a high level. At the same time it was clear that the team would need time to change. Parker had been coach for longer than any players had been alive, and by a wide margin at that. Quinn would need to reimagine the image of the team and try to build his program. This is why the Terriers finished 2013 at 10-24-4.

But then came news. That news was Jack Eichel. 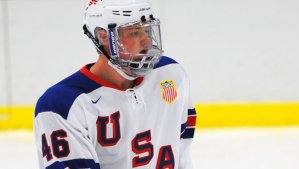 Jack Eichel in 2013 captained the Under-18 US Men’s National Team to a gold medal. Had it not been for the fact that he was/is still legally a minor, Eichel would have almost undoubtedly headed with the US National Team to Sochi this past winter. Eichel played his first game for the Terriers this afternoon. He led the team with five assists during a 12-1 drubbing of St. Thomas. Eichel made an immediate impact. This game also happened just two days after the New York Times profiled him as “The New Face of American Hockey.” This kid is special. He is widely projected to be picked either first or second in the 2015 NHL Draft and immediately join the ranks of Evgeni Malkin as one of the best centers in hockey. He is far from the only amazing player the Terrier have to offer in 2014, but he is undoubtedly the marquee player. Just by having Eichel don the number 9 sweater this winter the Terriers are immediately putting the disappointing 2013 campaign behind them.

But Eichel isn’t the only exciting player taking the ice on Commonwealth Ave this fall. In fact, someone with a far better pedigree laces up for her senior season this year.

Marie-Philip Poulin comes back for her “senior” season this year. Senior is emphasized as this is an extended stay at BU for Poulin. She would have had her true senior year last year. However, she was busy with a larger goal. She was leading Team Canada to a gold medal in Sochi. It’s her second gold medal. Allow me to reset this – there is a two-time Olympic gold medal winner walking the streets of Boston and attending class surrounded by fellow Terrier students. This is amazing. Poulin has scored 4 of the past 5 goals in gold medal games for Team Canada. There’s a decent chance that she will never pay for a drink in Quebec, Toronto, or Vancover, and everywhere in-between for the rest of her life. The last time she took the ice for BU the women’s Terrier team reached the national title game only to lose. This year projects to be another crack at adding an NCAA title to Poulin’s mantle alongside her Olympic gold.

Here’s the net or this all: There is a lot to be excited about with Terrier hockey in 2014-2015. Jack Eichel will get to prove his worth at one of the most storied hockey schools ever. Marie-Philip Poulin will get to try and lead the Terriers to another NCAA tournament final. There is a real chance that both the men’s and women’s Terrier hockey programs could make national waves this year. They also have talent to spare for years to come. Ladies and gentlemen, a slap puck dynasty may be upon us.