The Taste of WGBH 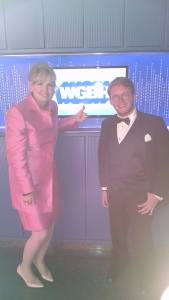 On the whole, life is more fun when you just say yes. Through my 21 years on this planet I have gotten to do a lot of really interesting and, admittedly, really odd things just by being willing to throw myself into something. Why not? Life is, after all, meant to be lived.

This is the mentality that had me try black squid ink bread last night. Astonishingly, it was way tastier than I thought it would be.

A few weeks ago I had received a message from my aunt Sheila. Sheila lives here in Massachusetts and was one of the deciding factors in me coming to Boston University. Should anything go wrong, se would be my refuge. Additionally, should I ever need to escape the perils of the dining hall, she would again be my refuge. Sheila sent me an email detailing that she had an extra ticket to a function at WGBH, Boston’s PBS and NPR outlet.

Like most other things, I said yes immediately. I was also informed that the event would be based around mingling with people and eating food/tasting wine. As an overly-social newly-21-year-old college student, this was like paradise. The icing on the cake came from the fact that Sheila mentioned that the event was swanky – black tie was the go to look.

Well, after attending last night’s Taste of WGBH, that may have been a tad overstated. Most people came well dressed, but I’m relatively certain that I was the only one there who came in the full tux. That’s not a bad thing though, because as the picture above shows, I looked like I was ready to accept a Oscar should the night have gone that way. I channelled my inner Proposition Joe for the evening – “Look the part, be the part.”

(Side note: That clip may be my favorite television quote in history)

Sheila and I made it our mission to get to hang out with some awesome people, including her introducing me to Boston Public Radio cohosts Jim Braude and Margery Eagan, and try just about every piece of food we could get our hands on. I’ve never been very picky about eating, outside of a few small, and almost hypocritical preferences.

For example: I ate that squid ink break that had some sort of eggplant puree on it in one bite – one delicious bite, might I add. But I outright refused to eat anything that had tomatoes on it. No, I don’t understand me either.

But the highlight of the night was just hanging around with Sheila and talking about random stuff the entire time. The two of us share our Lenahan-family sense of humor and quick mind for jokes. She knows those radio co-hosts because she’s called in to their show with comments for years. She’s a Boston equivalent to Howard Stern’s recurring characters.

But as we made our way around mingling and scarfing down awesome taste plates we just talked about fun thing after fun thing. She has been one of Unbreakable’s biggest fans and supporters since even before I made the site. It’s overwhelmingly reassuring to see multiple people in my family, especially those that would not lead me astray with falsely polite statements, tell me to keep working towards all these goofy, fun goals I have.

So aside from eating food, tasting wine, meeting new people, and just having a ball, last night served as a confidence boost to keep doing this blog, and keep grinding overall. It was awesome on the whole, and should WGBH do it again, try to snag some tickets, only to eat like a king for a night.

A huge thank you to WGBH for the hospitality and the eats, and to my Aunt Sheila for not only bringing me, but for continuing to be the absolute best.